From the foreshore car park walk to the little bridge over the River Corran and look out to sea. To your right is Sir John’s Hill. It was probably named after Sir John Perrot, who was granted the castle and Lordship of Laugharne by Queen Elizabeth I in 1575. The poem Over Sir John’s Hill was written by Dylan Thomas soon after moving to the Boathouse in 1949. The poem was based on his view of the hill from the Writing Shed.

The Birthday Walk goes up the hill, following one of Thomas’ favourite walks, which inspired his Poem in October, written after a walk over the hill on his 30th birthday in 1944.

Laugharne Castle to your left dominates the foreshore and once controlled the crossing point of the River Tâf. At the time the sea came in much closer and the port (1) or small harbour of Laugharne lay alongside the River Corran which flows into the Tâf. From here the medieval and Elizabethan borough traded with Bristol, Ireland and Brittany.

Later coal from local coal fields was brought around the coast and landed here. Granaries and warehouses lined the Strand. Several were converted to factories for processing cockles collected from the bay. The garden with the wooden bust of Dylan Thomas is on the site of a cockle factory.

Cross the bridge and walk along the foreshore path beneath the castle. The castle was converted into an elegant fortified mansion by Sir John Perrot. His work can be seen in this elevation. The red stone indicates the remains of the early medieval castle, while the green stone masonry is later in date. Perrot increased the height of the castle, added the mock battlements and inserted the large Tudor style windows.

Carry on along the path and past a footpath on your left. This leads back into Laugharne. It is also an alternative route to the Boathouse if you cannot manage steps or the tide is right in. Otherwise walk on under the cliffs and around the corner. You will catch glimpses of the Boathouse as you walk. Follow the path as it bends to the right.

If the tide is in and this section of the path is under water, you can go straight ahead over the rocks and up the steps to Cliff Walk. Locally these are called “first stops”.

Just before the Boathouse the path ends. Take care as you cross the rocks, which can be slippery and go up “second stops” to Cliff Walk or as it is now called Dylan’s Walk. You will come up on top of the cliffs by the Writing Shed (2).

The Writing Shed was a small empty garage when Dylan Thomas moved to the Boathouse in 1949. He made it his writing shed and wrote a number of his key works here.

It has wonderful views of the river and estuary and gave him inspiration. Just a short distance past the Writing Shed is the Boathouse (3).

The Boathouse was originally built in the early 19th century and leased as two fishermen’s cottages. Dylan, Caitlin and their children first moved to Laugharne in 1938. They lived in a cottage, Eros, in Gosport Street and the soon afterwards a house called Sea View. Dylan returned to London to work during the war. For a short while the family also lived in New Quay, Ceredigion.

They came back to Laugharne in 1949 and the Boathouse was Dylan’s home until his death in 1953.

From the Boathouse turn back and walk along Cliff Walk towards Laugharne. From the path you get delightful views of the Tâf estuary as the river flows out into Carmarthen Bay. In the distance is the forest at Pembrey with Pembrey Mountain to the left. On a clear day Gower can be seen in the far distance.

Below Sir John’s Hill to the right are Laugharne marshes and saltings, once an area flooded by the sea but now farmland protected by a series of sea walls. To the left and across the Tâf you can see a lane coming down the hill. This was once a major route way across south Wales as the lane led to the ferry point, where travellers crossed over to Laugharne, before travelling further west.

The Tâf estuary is part of the Carmarthen Bay and Estuaries Special Area of Conservation. It is an important and varied marine habitat. From here you can usually see some of the many species of waders and sea birds that live here. For many years cockles were collected and processed here and the industry supported many local families. Commercial cockle fishing still takes place, but now only a few local people are involved.

Carry along the path until you pass the impressive gates to Glan y Môr, once the home of the architect Edward Faulkner and now a holiday complex. As you pass the gates turn sharp right and follow the bridle path towards the church. This path can be muddy but offers views back across Laugharne and is worth the effort. These lanes date back to the medieval period when they provided access for people of the town to their strip fields which surround the town. Although much changed the strip fields are still visible today and administered by Laugharne Corporation.

When you get to the end of the lane a gate on your left gives access to the new graveyard. Dylan Thomas, who died in New York in 1953, is buried in the new graveyard. His grave is marked with a simple wooden cross. His wife Caitlin died in Italy in 1994 and is buried with him. 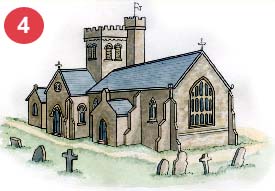 Cross the bridge over the cobbled lane into the old churchyard around St. Martin’s fine medieval Church (4). The graveyard is wonderfully atmospheric with ancient tombs, crypts and fine yew trees. If it is open, the church is worth a visit and has some interesting and artistic monuments.

Walk down the steps from the graveyard and across the car park to Church Street. Turn left past the lych-gate and walk up the main road now called Clifton Street. The road changes names several times as it passes through Laugharne. Cross over the road to the hall and Tin Shed. 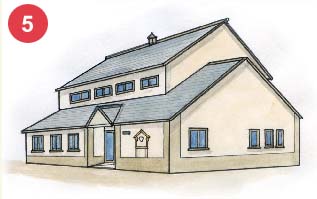 Laugharne Memorial Millennium Hall (5) was built to replace an earlier hall commemorating those killed in the First World War. There is a small area with memorials listed those killed in both wars which includes a commemorative plaque to William Fuller the first Welsh soldier to win the VC, on 14th September 1914, during the First World War. The nearby Tin Shed Museum tells his story in detail and displays military collections from the Second World War.

Cross back over the road and walk on up the street past the cottages until you come to upper Laugharne and King Street. The street is flanked by Great House, built in the early 1700s, on the right and then on the left by the Limes and Moir House built in 1790. At this point you enter the late medieval town and this may be the location of one of the town’s later gates. King Street is a wide street with a number of interesting Georgian houses. As you walk along you pass Laugharne’s last remaining nonconformist chapel, the English Congregational Church, built in 1890. 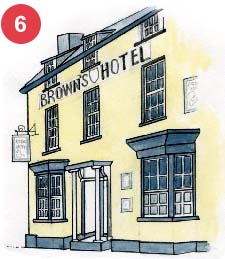 Two others have been demolished and the former Wesleyan Methodist Chapel in Newbridge Road is now a house. Further along the street is Browns Hotel (6). It was built in 1752 and is best known as a favourite haunt of Dylan Thomas. Go from the Browns and stop at the Mariner’s corner. In front of you can be seen the gatehouse to the castle and the clock tower of the town hall. At this point the road changes its name to Market Street. This is the area of the early medieval town and possibly the site of one of the town’s early gates.

Now turn left at the Mariner’s corner and go up Victoria Street past the New Three Mariners Inn. Victoria Street is thought to follow the line of the early medieval town ditch. It was once called Hangman Street as the gallows stood on the cliff at the end of the street. Turn right before you reach the graveyard of the old Congregational Chapel. When you have passed Sea View, where Dylan Thomas lived for a short period, turn right into Market Lane. Here you are in the heart of the old medieval town.

Walk down the cobbled lane towards Laugharne Town Hall (7). The present building dates to around1747 and replaced the town’s medieval hall. The council chamber is on the first floor and Laugharne Corporation still meet here. Beneath is the old market hall or shambles. A small lock up or gaol was added in 1774. It sits outside the castle gate in the middle of what was the town’s early market place.

The town or borough of Laugharne received its first known charter in either 1290 or 1307 from Sir Guy de Brian. Sir Guy held the Lordship of Laugharne and its castle. Though there is evidence to indicate that the town was founded well before this, Laugharne Corporation traces its formal history back to this charter.

The Corporation was not reformed in 1835 and was technically abolished in 1886. However it has continued and is a unique organisation operating under its original charter and administering lands it has held for hundreds of years. It now operates as a registered charity maintaining its medieval customs and traditions.

Between the town hall and the castle is Castle House. The present building was started in 1730 for Sir Thomas Powell and the front facade was remodelled around 1800 for Richard Starke. Richard Hughes, the author, lived here between1934-46 and the architect of Portmeirion, Clough Williams Ellis made changes to the building.

Laugharne Castle (8) or Abercorram Castle is first mentioned in 1116. It controlled the crossing point of the River Tâf and was then accessible by sea. This early castle was a simple structure defended by an earth bank and timber palisade fronted by a ditch. It also utilised the natural defences of the cliff edge and the River Corran. It was here that Rhys ap Gruffudd, the Lord Rhys of the kingdom of Deheubarth and King Henry II met in 1171.

They established a peace that collapsed on Henry’s death in 1189, when Rhys attacked and captured Laugharne and other local castles. It was retaken soon afterwards but destroyed in 1215 by Llewelyn ap Iorweydd. William Marshall recovered the castle in 1223. In the centuries that followed the castle was rebuilt and enlarged in stone and then eventually a magnificent Tudor mansion.

From the castle walk down the main road, now called Wogan Street, across the road bridge over the Corran and past Island House. The Spar shop opposite was once a corn mill and the stream that turned its wheel ran down the side of the house and hence its name. It is one of the oldest surviving houses in Laugharne and dates to the 16th century.

Cross over to the Grist (9) which is a large triangular open area which originally linked to the foreshore and harbour. The cross dates from 1911 but sits on an earlier, probably medieval, stone base. From here cross back over the road to the foreshore car park